How can I invite an attendee to and from a Virtual Stage?

This feature allows for you to bring an Attendee onstage to ask a question live or share a story without allowing full Presenter permissions during the entirety of the event.

Note: if promoting An attendee to stage while live, they will join the backstage i.e. the Attendee will not automatically join the stage! 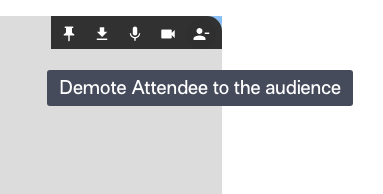 This will remove the Presenter role and permissions from this user and allow them to remain in the remainder of the event as an Attendee!

Pro-tip: If you have pre-set listed Presenters via e-mail in the event details within your Admin Dashboard or by code with Access Passcodes - the Presenter can refresh and enter the Virtual Stage as a Presenter despite being demoted.